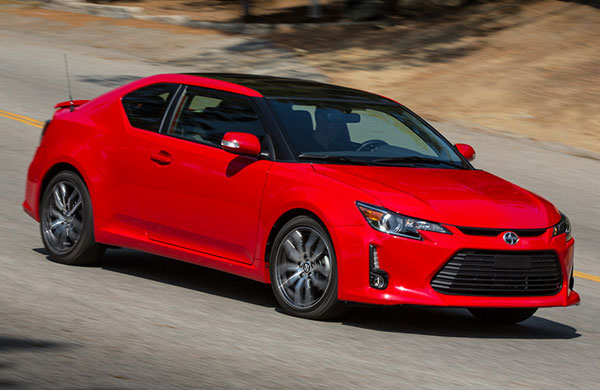 Scion consistently makes affordable, stylish, and reliable cars, and that’s especially true of the Scion tC. While the tC made its initial debut back in 2005, many drivers have yet to slip behind the wheel of the sleek automobile. Anyone who is in need of a sporty automobile that they can afford and fall in love with will want to take a closer look at the 2014 tC.

Even though the tC has always had an impressive look, the 2014 model looks even better. It includes new bumpers on the front and back, 18-inch wheels, a new grille, and newly designed taillights and headlights.

If you like the look of Scion’s FR-S, but don’t like the price, then you might be happy with the appearance of the new tC. You and your new car might both earn a few double takes when you tell people that you’re driving a Scion. With a $20,000 starting price, the new tC gets the job done without breaking the bank.

The 2014 Scion tC is packed with nearly 175 pound-feet of torque and 180 horsepower thanks to the 2.5-liter, four cylinder engine under the hood. Another feature of the new model is that is has an all-new six-speed automatic transmission thanks to Scion’s engineers. The new transmission is capable of silky smooth gear transitions and swifter shits. What this means for drivers is that they can enjoy a sportier driving experience as well as an upgraded performance. Rather than relying solely on horsepower to give drivers a sportier feel while behind the wheel of the 2014 tC, the new Scion model falls back on sheer aesthetics. In any case, it still manages to get the job done and do so with panache.

Sliding into the new tC you’ll find a 6.1-inch touchscreen that shows artist names, titles of songs, and the album you’re currently listening to. Not only that, but you can quickly switch between HD, AM, and FM radio. The car is also Bluetooth capable for your digital device or phone.

You’re sure to enjoy the sound quality streaming from the tC’s speakers. This is thanks to the Pioneer-sourced eight-speaker and 300-watt system. Not only that, but the sound system also has an individual high-, mid-, and low-range speakers. What makes this so unique in this particular model is that this quality of sound is not typically found in a car in the tC’s price range. Yet another advantage is that Scion enjoys making cars that their drivers can fully customize to their liking, so feel free to put a little more bass in your face.

Not only is the 2014 Scion tC safe for your budget, it’s also safe for you and your passengers. There are plenty of vehicles out there that have earned Top Safety Pick ratings from the Insurance Institute for Highway Safety (IIHS), but not many automobile manufacturers can say that they’ve earned the IIHS’s top safety rating that needs at least an Acceptable score in the all-new slight overlap front test. If you’ve got your eye on Scion’s new model, you’ll be pleased to know that it earned a five-star safety rating by the National Highway Traffic Safety Administration.

The 2014 Scion might not be the fastest or best performing car on the road, but it’s most definitely one of the most fun to drive.