The all-new Buick Encore relies on massive advertising campaign based on an innovative adventurous idea to attract the viewers. The brand of General Motors includes prehistoric monsters in its advertisement. The compact crossover 2013 Buick Encore partners in its first television spot with dinosaurs. The impressive film with animated effects is 31 seconds long. For its first full month at its dealers overseas, GM reported 1600 marketing realizations of the 2013 Buick Encore. The Encore can be found at dealers around the nation, including our locally owned Klick Lewis Cars in PA, where we found a nice stock of the various trim levels of the Encore. 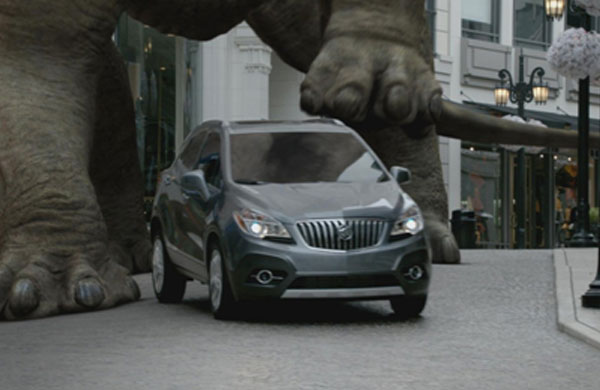 The extremely impressive video includes prehistoric monsters and could be seen with the name “Dinosauria” in the different online and social media platforms. It aims to be intriguing for every member of the audience, as it could make even the passive ones potential buyers and car lovers. The structure of the ad could attract people from every generation and social group. The advantages of the modern vehicle are represented through the prism of a magical story as a reference to the exceptional and unprecedented nature of its characteristics is professionally made.

“The age of the over-sized luxury car is about to give way to a smarter, more nimble breed.” It is time for something new – exciting experience and modern movement. Buick is here to offer you that. It is practical vehicle for a family, couple or a single person, you will always feel comfortable and on your own place in your brand new Buick Encore.

“Clearly the next big thing in luxury is small. “  The smaller the vehicle is, the more luxurious it is supposed to be in the modern era. The advertisement is short, clear and functional, and as a consequence the viewer does not need any further information. It mentions the important with simple words and implies the innovative with high-quality image.