Some products simply belong to their golden eras, but it appears the Mercedes G550 didn’t receive that email message in 2017.  Converting from their bulky, bland and uneventful interiors screaming ‘1974,’ Mercedes-Benz definitely adapted the SUV design hole, left by their ancestors and modernized the once-abysmal interior. Returning from their year-long hiatus in style, Mercedes delivered the same strong construction and a similar over-$100k pricing model, yet threw some toys in for the privileged few to purchase. 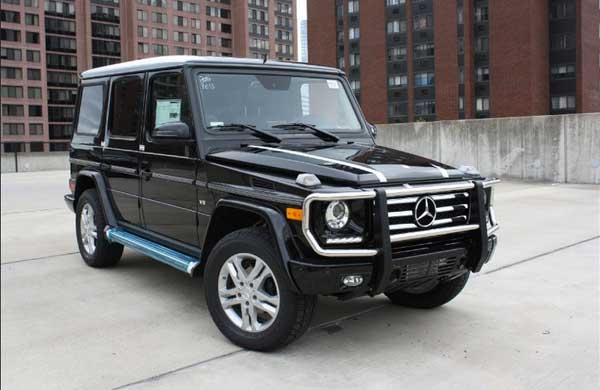 Unlike what Mercedes delivered 43 years ago, you’ll just have to ride one around the dealership lot, to discover why this massive grocery-getter-slash-soccer-mom delight is growing in popularity amongst millennials and psychologists.

Gone are the 8-track and cassette tape players, arriving are highly technical GPS readouts and satellite radios. With more buttons than NORAD and elegant comfort rivaling the Bentley’s configuration as the standard commercial vehicles for your business, G550 buyers definitely see their money spent wisely. Seating is pleather or genuine leather, depending on your evaluation from afar, yet cloth seats are viable options when speaking to dealerships.  Drivers can Google, ogle, and allow their kids to doodle in comfort, all with button controls similar to spacecraft.

Many Mercedes owners love power and safety, both trademarks which put the German company atop the luxury automobile wish lists.  Enjoy your 5.5L 382hp V8, supercharged by nature, which shifts smoothly through 7 gears without jarring.  Chassis and steel construction still provide off-roading fun, highway safety and protection against flying meteorites.  Gear ratios have been set low enough to allow steep mountain climbs or pulling friends’ Malibu’s out of ditches.

Many of the same power features carried over from the base G500 model, including 7000 pounds of towing capacity and the trademark battering ram-style front bumper. One major buyer caveat we found revolved around high speeds: once reaching 100mph, even the slightest stomach rumble could push your trajectory off-balance.  Short of running from your mother-in-law, 95% of humanity shouldn’t need to amass 80mph, anyway; however, to control insane speeds, Mercedes governed G550s at 135mph.

Acceleration for SUVs is generally high as Mercedes isn’t exactly popular amongst drag racers.  You could jump off the line and nail 60mph in just under 6 seconds, yet it takes nearly six times that much to hit double that speed – 32.9 seconds to reach 120mph.  You could always race your girlfriend’s Suburban a quarter mile since it’ll do that run in 14.6; braking from 70-0 takes 191 feet of distance, however, so make sure you’ve planned accordingly before running headfirst into a ravine.

With a ride that’s smooth as silk, interested buyers will grow to appreciate the amount of absorption Mercedes-Benz put into their G550, much like their other off-road style G500 (which we’ll touch on momentarily).

Giving Credit Where Due

Fuel efficiency was never a consideration when constructing rolling refrigerators, which the Mercedes G550 resembles.  Getting 12/15 in 2017 models and similar in past offerings, cities with stoplights would kill economists owning this killer beast. Shifting paddles were added, resembling what Castroneves would expect when purchasing the G550.  A two-speed transfer case means you’ll shift between gears without much interruption, while guidance provided by the Electronic Traction System will assure optimal speeds are maintained during adverse weather conditions.

We’re rather impressed with how far interior design, mainstream electronics and safety features have reinvented the G-series wheel for Mercedes.  Test-driving the Mercedes G550 would have nearly every driver falling immediately in love with truly consistent, albeit slightly expensive, German engineering.

Luxury car buyers who love off-roading will grow to appreciate the rough-and-rugged version of the G550. A reduction transfer casing that equates to 17 additional inches of ride height and comfort, coupled with 22” wheels (like a Wrangler), give Sunday drives, a new meaning. Should your wife approve of the $220k+ price point, she’ll appreciate 440 pounds of torque under her freshly-manicured feet. You’ll enjoy seven thrilling speeds and 410 horsepower — which is outstanding, you know, if you’re inclined to race Bentleys.

Making its North American debut back in 2016, the 2017 model mirrors it’s father. Technology features Apple CarPlay, an above-average infotainment system with acoustic-quality speakers, and even Android connectivity. Just enough tech to suffice, not enough to distract.

Depending on how you view SUVs, Mercedes challenges its less expensive rivals with the G550’s power and semi-affordability. With plenty of power and the classic Benz safety features included, investing a little more gets plenty more with both variants of the G550. However, don’t expect long intervals between fill-ups.