Plug-in hybrid and electric vehicles, uses electrical energy which is stored in batteries. Electric cars were famous in the twentieth century; the energy crises lead us to the manufacturing and usage of electric cars, because these cars are environment friendly and cheaper than petrol cars. 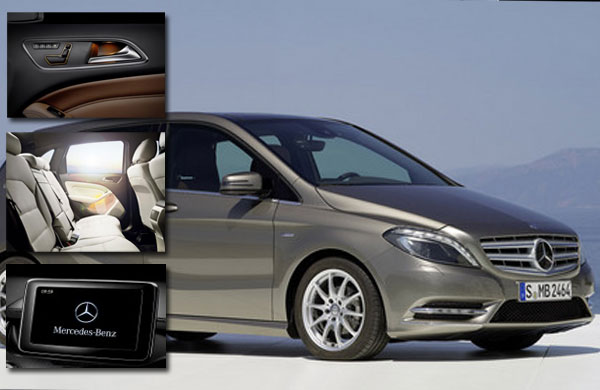 Mercedes, the German largest vehicle manufacturing company, has revealed its newest addition to Mercedes-Benz’s family of electric cars recently in a public premier at Paris Motor Show. The company is presenting a battery powered electric vehicle of the second generation B-Class.Developed in partnership with Tesla, the production is ready and this masterpiece is to be sold in selected markets only from early 2014.

The company uses the ‘Lithium-ion’ battery pack for providing electrical energy to the vehicle. According to Mercedes-Benz, these batteries gives an overall range of 124 miles on a full charge. They can be charged both by the plug by recuperative means, and the battery can be easily charged at any standard domestic 230 V power outlet or alternatively at a 400 V high voltage terminal. These batteries are adjusted in the floor of the front wheel drive B-class’s platform ahead of the rear axle, a setup the German car makers are calling Energy Space.This energy space provides a safe and saving means to powerful lithium-ion battery which also has a positive effect on the vehicle’s center of gravity.

With the success of B-class models with battery powered electric drive, you can enjoy the comfortable drive with full suitability for everyday and family use.The electric drive concept is well equipped with a 100 kW electric motor whose powerful 310 Newton meters of torque provide for driving over a 200 kilometer range.

The Paris Motor Show 2012, officially known as Mondail de l’Automobile(French name) is shown after every two years alternating with the Frankfurt Motor Show in Germany on September 27th to October 14th. In Paris Motor Show, automakers displayed their latest concept cars, green cars,super cars and production versions of the Mercedes family including electric drives. These new electric cars are in three different vehicle categories from Mercedes-Benz, Mercedes-AMG and smart pursuit of its drive strategy focusing on the ultimate objective of zero emission driving.
We are hopeful that in future, these types of environment friendly car are manufactured continuously and easily available in all over the world. By this way might be we can control on our energy crisis.