There are two special Dodge Ram Trucks that compete in the Monster Jam arena.  They are Rammunition and Ramanator.

Rammunition monster Dodge Ram Truck is owned by Mark and Tim Hall.    The driver is Geremie Dishman.  Rammunition has a 2012 Dodge Ram 1500 body and a 565 Hemi engine.  This gives the Dodge Ram Truck more than 2000 horsepower.  It is an automatic with 66 inch Terra Tires. 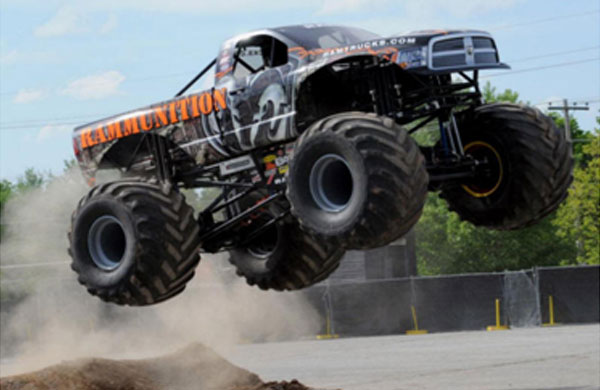 We chatted with a nearby RAM showroom – Earnhardt Auto of AZ, about the history of these RAM Monsters, and the story is impressive.  In 1986, Tim and Mark Hall formed “Hall Brothers Racing”.

They used other trucks to create their monster truck line.  In 1999 the Dodge Ram became the Rammunition and Ramanator.  Dodge saw the success the Halls had in the monster truck industry and decided to sponsor them with a Dodge division of Daimler- Chrysler corporate sponsorship.

Perhaps one of the reasons Ramanator and Rammunition are both among the most feared competitors in monster truck racing is the Dodge Division of Daimler – Chrysler corporate sponsorship.  The factory backing has enabled the Hall team to make significant performance gains, particularly with the engine.

To see these Dodge Ram Trucks up close and personal go to the Monster Jam website for event dates.  You will also not want to miss the action of Rammunition’s twin, named Ramanator.

The Dodge Ram Truck Raminator was the 2012 General Tire Monster Truck Thunder Drags National Champion. Raminator is valued at $150,000.00.  To get an idea of the massive size of this Dodge Ram Truck the height is 10 feet, Width 12.5 feet, and weight 10,300 pounds.

If you love Dodge Ram Trucks you will want to see these monsters in action.  Check out Hall Bros Racing Inc website for more details. www.raminator.com   Click the fan club link to get the latest news.

Things to Know Before Purchasing a Trailer

How to Choose a Truck Driving School