In the North American International Auto Show, 2013 a latest concept by Volkswagen was exhibited. It is the 2013 Volkswagen CrossBlue SUV concept. It is a special edition for Canada and America. It is developed to enhance the VW lineup of 5.0 meter seven-passenger average-sized SUV. Right now, Volkswagen has only two sport utility vehicles: Tiguan and Touareg.

Major Features in a nutshell

CrossBlue concept is featuring the most advanced “plug-in” hybrid systems such as TDI Clean Diesel, double E-motors, “Propshaft by wire” and a dual-clutch transmission. It is a four-wheel drive with a combined fuel economy of 89 MPGe (in hybrid); while in diesel maneuvering its economy reduces to 35 mpg combined. CrossBlue goes to 100 kms by consuming 2.1 liter of fuel, as per the test results suggest. 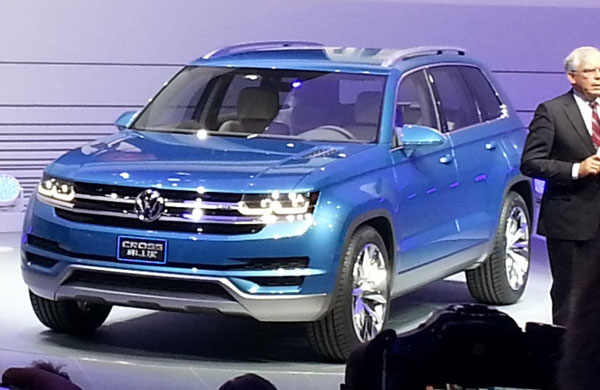 It is a truly muscular sled that has power up to 225 kW and 700 Newton Meters of torque; it hits 60 mph in 7.2 seconds which is just not remorseful. The pivotal benefits affiliated with 2013 CrossBlue are mentioned here:

CrossBlue is a zero emission automobile, thanks to its lithium-ion battery. Fully change it and enjoy the ride with no emission at all. It could go till 14 miles with this battery. In the NEDC (New European Driving Cycle) its all-electric driving capacity became 33 km.

It is a voluminous and airy minivan within its class. It has six distinct seats conceptually that makes it a contented, calm ride with lots of space for each person to enjoy sitting on. The driving seat relishes from an excellent visibility to move it in any direction, front or back. And with twelve airbags it becomes the most innocuous wheel for the families to rely on.

Guess who is the designer of this brilliant masterpiece? Any abstract?

Well, we tell you, it is a co-production of both the American and German master minds which is why the car is an amalgam of German “Design DNA” plus American strength.

It is Walter De Silva, the iconic car-fashioner and The Head of Designs at Volkswagen Group, Germany and the celebrated Klaus Bischoff, who is also a Design Head of the Volkswagen Brand. So, mark my words, Volkswagen CrossBlue is going to blow your minds once it appears in the market.

The 1733 mm tall future SUV is painted in “Glass Flake” and is 4,987 mm in length plus 2,015 mm broad. Its 21-inch alloy wheels are dashing and just up-to-the-minute, except a great road journey next time.

Without folding the rear seats its capacity for bag and baggage is 600 mm and after folding them, this area zooms in to 1,387 mm; while the second queue is also foldable which directly implies a greater cargo slot of about 2,230 mm. Ultimately, the front seat also folds and widens this storage even more.

Volkswagen CrossBlue is a resilient SUV with extraordinary potential. Although its concept is only divulged to us; yet it is like a show-off piece rather a proper near production carriage.