The facelifted Skoda Yeti has debuted at Frankfurt Motor Show with its redesigned exterior, interior and enhanced engine. It will go on sale in Europe by the end of this year.

The headlights are redesigned and now they are sharper looking. The new grille and a sporty bumper add stylish looks to the car. It also gets a 3-spoke steering wheel with different design options.

The new SUV is available with a wide range of petrol and diesel engines with front and all-wheel drive configurations. Gearbox options remain the same with the 6-speed manual and 7 speed automatic. 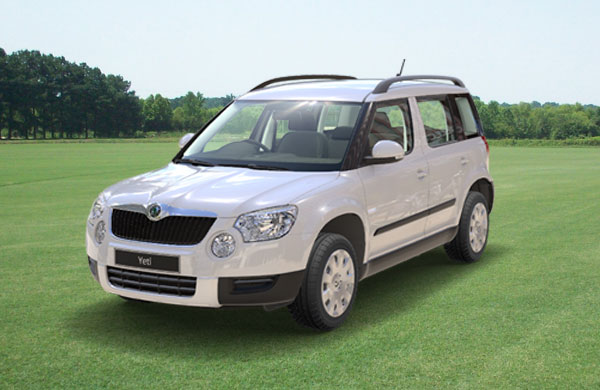 Most of the Yeti’s are front wheel drive but the suspension is raised. The new Yeti offers a broad range of specifications and engine and this all is available at a very reasonable price. It comes in 10 main specifications S, entry-level E, SE, SE Plus, Elegance, SE GreenLine II, S Greenline II, Elegance GreenLine II,

It is offered in two different trim levels. City and Off-road, the city level has body-colored bumpers while Off-road has the front bumpers and side moldings and have a rugged look.Yeti gives you a good, clear view out because of its easily adjustable upright driving position. The steering wheel is really soft, nice and accurate. The gearbox is positive and controls are generally light and very easy to use.  105bhp 1.2 liter petrol engine offer plenty performance but it can get a little strident. Fuel economy is 44mpg which is nice

The engines are polished and Yeti feels like a car instead of the off-road ride for everyday driving. We can opt for four-wheel drive to the 168 and 138 bhp 2.0 TDI diesels.  The 4×4 system gives you a good off-road experience. An automatic gearbox is also available on the entry level 1.2 liter TSI petrol. But it has a small negative influence on the 2013 Skoda Yeti’s efficiency.

Comfort and reliability are the two main things offered by this new Yeti. Seats are comfortable and allow three people to sit in the back very easily.The car has the power to absorb most bumps on the road well. Engines are noiseless.

Plenty of support in the comfortable seats means that general comfort is good in the Yeti. The car-like ride absorbs most bumps in the road well. The Yeti’s dimensions allow three adults to sit abreast in the back without causing any pain, and the engines are nice and quiet. There is the slight hint of wind noise when driving at motorway speeds, but road noise is hushed, however, making the Yeti very easy to live with over long journeys.

At the heart of Skoda’s rebirth is reliability. The company has consistently been one of the top performers in customer satisfaction surveys thanks not only to its rock-solid reputation but also because of the excellent level of service offered by Skoda dealers. The Yeti itself managed to retain the number one position in the 2013 Auto Express Driver Power survey’s top 100 cars, following its triumph in the 2012 poll. It scored at the top of virtually all the categories, including reliability and ease of driving.

Skoda, meanwhile, did a drop down once place in the automotive Companies ranking to number two, but that is more to do with Lexus having an excellent year, rather than Skoda slipping. Because many of the major components are from the Volkswagen family, they are well tried and tested so shouldn’t present any problems. In short, you’ll be hard pressed to find an unreliable Yeti out there in the UK market.

It’s also one of the safest cars, too, being awarded the full five-star rating in the Euro NCAP crash safety tests and now coming fitted with electronic stability control, anti-lock brakes and front, side and curtain airbags as standard across the range. Six airbags round off the safety equipment. The interior fit and finish is also impeccable, made up of quality VW Group plastics.